American zoos may very well be the most popular place for public bronze sculpture. Visitors become as attached to the sculptures as they do the animals they depict. Public sculpture – particularly bronze because it’s warm and invites interaction – often stimulates a sense of community wherever it is placed (although some pieces are not embraced at all like Richard Serra’s Tilted Arc, installed in New York City’s Federal Plaza in 1981, and in 1989 was carted off and destroyed after 2 Public Hearings determined that the general public hated it. Serra was just ahead of his time and is now in every major museum in the world). 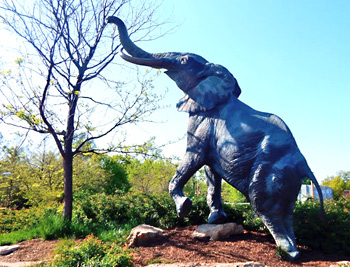 Public sculpture can become part of our shared history and evolving culture—a touchstone to our collective memory. Certainly that is true at the Saint Louis Zoo. This home to 18,000 animals and 600 species is also full of public sculpture. A young elephant bronze with its head upraised is actually the spot where millions of our region’s residents and tourists have had their photos taken. It is a very authentic bronze depiction of a five-year-old male elephant. Even more beloved is the sculpture of the late and much loved, Phil the Gorilla—another popular spot for everything from family photos to selfies. Both sculptures were created by British artist, William Timym.

The largest and most imposing sculpture in the Zoo’s collection is Animals Always. It’s 130 feet long, 36 feet tall and weighs 100 tons—all CorTen or weathering steel. The steel is formulated to oxidize a thin, almost chocolate brown coating that stabilizes over time, protecting the steel beneath better than painted steel. The massive piece came to town on 15 flat bed trucks.

The largest sculpture at any public zoo in the United States, Animals Always features over 60 animals peeking out from behind sculpted trees, ferns and other plant life.

When it was first installed, some people complained about this amazing piece of work—saying it looked too rusty. Public art everywhere can prompt extreme reactions. In New York City, Serra’s Tiled Arc was removed from the Federal Plaza because so many building workers and locals complained about it. When the untitled sculpture by Pablo Picasso in Daley Plaza in The Loop was first unveiled in 1967, Chicagoans hated it. Mayor Richard Daley was encouraged to remove it, but Daley said at its unveiling: “We dedicate this celebrated work this morning with the belief that what is strange to us today will be familiar tomorrow.” Today, everyone in Chicago celebrates this sculpture, which can be seen in several movies: Blues Brothers, The Fugitive and Ferris Bueller’s Day Off.

Good public art improves any site by engaging us.

It makes us pay attention to our environment. It can encourage us to question what’s around us. It gives us a rich connection to our history, the natural world and our community. Art can celebrate the qualities that make a place special. It can challenge, delight, educate and illuminate. Public art is part of our shared existence and our evolving culture. And, like admission to the St Louis Zoo, it is free to all.

NOTE: This is an edited re-post and was originally authored by David McGuire, AIA