Jeff Buccacio has worked as a Lead Designer/Specialty Effects sculptor for many blockbuster movies in Hollywood, and is known for his ability to integrate & organize the many aspects of major projects. Buccacio’s reverence for the great 19th century sculptural interpreters of American patriotic themes is evident in his numerous commissioned public monuments and his work is so thorough, he guarantees it for life. In the past 10 years Jeff Buccacio has come to appreciate the community life and traditions in the towns west of Boston, where he was raised and now lives and works.

When the Town of Natick was gifted with a piece of steel from the World Trade Center wreckage of 9-11, several Town employees formed a committee to ensure that a proper memorial was erected for those who died that day and for all that continue the fight for Freedom. Immediately, Jeff Buccacio’s name was suggested. His reputation as, “the best in the business” was soon proven to be true. For those involved in the process, Jeff was patient, professional and the final product speaks for itself. Please visit the Police and Fire Complex on East Central Street to see for yourself. Jeff has created a warm and welcoming area to rest and reflect.

“Buccacio Sculpture Services completes an existing vacancy in the art community in New England. Jeff is already well known as a successful sculptor and now he is sharing his vast knowledge of sculpture and casting with other artists. Their foundry will be the continuation of the work that was done at the Paul King Foundry.

In 1966 when the Paul King Foundry opened, I realized that I had become part of a long tradition at the Gorham Bronze Company. My father was a silver designer at Gorham and the first commercial foundry where I worked, was started by workers from Gorham. As the years progressed, the Paul King Foundry started making many of the old patterns of sculpture that were in the possession of Gorham. The Buccacios are the present day participants in that Gorham tradition.”

“A group of Vietnam Veterans (myself included) – who were all former Marines – decided to work on a project to commemorate the 50th anniversary of the Vietnam War.

It took a year but Jeff Buccacio created an amazing piece of art that attracts people on a daily basis.

For the families who gave up their sons to the Vietnam War, this work honors their sacrifice. This bronze memorial of a single young man reminds us that we all went off alone and 61 (their names are inscribed in stone under the statue) of us from our area did not return.” 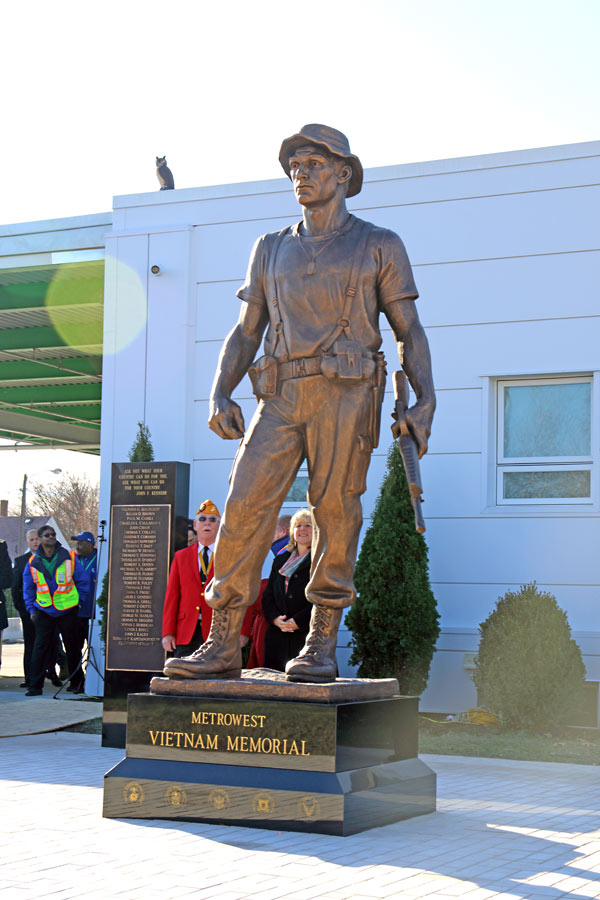 The theme of the ceremony was simple: It’s never too late to say “thank you.”

Thank-yous were hard to come by for soldiers returning home 50 years ago from the Vietnam War, speakers noted. A nation divided by politics didn’t do right by those who fought, those who were wounded and those who made the ultimate sacrifice. The handsome memorial unveiled Sunday can’t make up for those long-ago slights, but it will remind people every day of the gratitude felt by the region, state and nation for those who serve in uniform.

The memorial, located in front of the Blandin Street headquarters of the MetroWest Regional Transit Authority, features a larger-than-life sculpture of a Vietnam-era soldier and tablets listing the names of 61 troops from MetroWest communities killed in combat or who died later as the result of wounds received in Vietnam. Several hundred people came out to help dedicate the memorial, as did a dozen color guards, a quintet of bagpipers, a Blackhawk helicopter and the National Lancers, a ceremonial cavalry troop based in Framingham.

State Sen. Karen Spilka, D-Ashland, who was instrumental in obtaining funding for the memorial, reflected on the controversy that surrounded America’s engagement in Vietnam in the 1960s and 1970s. “In hindsight, we can see what a mistake is was to judge soldiers by the popularity of the war in which they served, rather than thanking them for their sacrifice,” she said. Spilka and others recognized the leadership of Ed Carr, a Vietnam veteran who is director of the MWRTA, in getting the memorial built, but Carr characteristically demurred. Just as Jim Cuddy, also a Vietnam Veteran, was describing Carr as a “visionary leader,” Carr interrupted with a whispered reminder, picked up by the microphone, that “it’s not about Ed.”

The dedication ceremony kept the focus where it should be: on the troops who served and the ones who never made it home. Peggy Griffin told the story of her husband, Charlie Sabatier Jr., whose name is one of the 61 listed on the memorial. Charlie was hit by a bullet during the Tet Offensive in 1968, she said, paralyzing him from the waist down. Sabatier became an advocate for disabled people in general and disabled veterans in particular, but he never got over his Vietnam wounds, which led to his death in 2009. Like veterans of all wars, he deserved recognition for his sacrifice.

“They need you to remember,” Griffin said. “We all do.”

The new memorial, sculpted by Natick native Jeff Buccacio, will be a constant reminder to all who see it – and especially to active duty troops and veterans – that MetroWest remembers their service, and thanks them for it.