NOTE TO SCULPTORS: FOR A SUPERB ANATOMY REFERENCE BOOK, SCULPTOR JEFF BUCCACIO RECCOMMENDS “ANATOMY OF THE ARTIST,” BY ELIOT GOLDFINGER

Did you know that in the 18th Century, Anna Morandi Manzolini became a world expert in reproducing the human body in wax? That, dear readers, required cadavers. A rare woman of science, she also was the devoted mother of six bambinos. Someone oughtta write a screenplay!

The Lady Anatomist: The Life and Work of Anna Morandi Manzolini
by Rebecca Messbarger

It’s the 18th Century. Anna Morandi was born in 1714 in Bologna, Italy and died at 60. She was raised in a traditional home where marriage, children, and a domestic lifestyle were natural choices for women. In 1736, she was married to her childhood sweetheart, Giovanni Manzolini, a professor of anatomy at the University of Bologna. She was 20, and he was 24. After five years of marriage, she was the mother of six children. In 1755, her husband died, and she was left with very slender means of support. She received tempting offers from other universities, but she preferred to remain in her native city, Bologna. 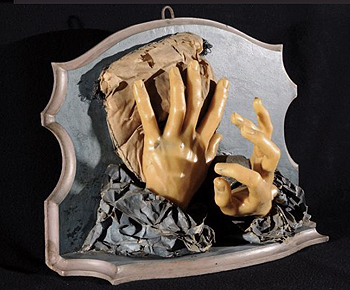 ANATOMY IN WAX: When her husband became ill with tuberculosis, she received special permission to lecture in his place. She became Professor of Anatomy upon his death in 1755. Knowledge of her talent in molding anatomical models spread throughout Europe and she was invited to the court of Catherine II of Russia as well as other royal courts. It became her major turning point in her life. In order to learn anatomy, she had to dissect cadavers, which was extremely difficult for her, but she overcame her fears. Giovanni Manzolini was so encouraged by her and her accomplishments that he again returned to his work. They were recognized as a team by many artists, intellectuals, and anatomists in Europe.

After her husband’s death, she was appointed Lecturer in Anatomy in her own name by the Institute of Bologna. Anna aided her husband, and then surpassed him in skill, and particularly in that scientific knowledge upon which the success of their joint labors so largely depended. She lectured in a lot of different places. In her lectures, she imparted with peculiar talent the knowledge derived from her husband, and also communicated many discoveries made by herself.

She clearly demonstrated, both theoretically and practically, the wonderful structure of the human body. She also crafted two portrait busts in wax, both of which are currently on display at the Palazzo Poggi in Bologna. One is a self-portrait, in which she depicts herself at work dissecting a human brain; the other is of her husband, engaged in similar activity. Her wax models were highly prized while she was alive and long after her death. Some of her anatomical models were so skillfully molded that they were extremely difficult to distinguish from the actual body parts from which they were copied. Furthermore, her acute skill at dissection resulted in her discovery of several previously unknown anatomical parts, including the termination of the oblique muscle of the eye.

She held the distinction of having been the first person to reproduce (in wax) body parts of minute portions, including capillary vessels and nerves. Her collection of wax models was known throughout Europe as “Supellex Manzoliniana,” and was eagerly sought after to aid in the study of anatomy. Her work became the archetype of such models as the Vassourie Collection, and the creations of Dr. Auzoux made from papier mache, which were the forerunners of those used in today’s schools and colleges. A collection of her models was acquired by the Medical Institute of Bologna and is housed at the Institute of Science in Bologna. After her death, a bust of her was placed in the Pantheon in Rome. Another portrait in wax, which she modeled herself, was placed in the museum at the University of Bologna and became one of its most precious possessions.

Honestly, this could be a movie.