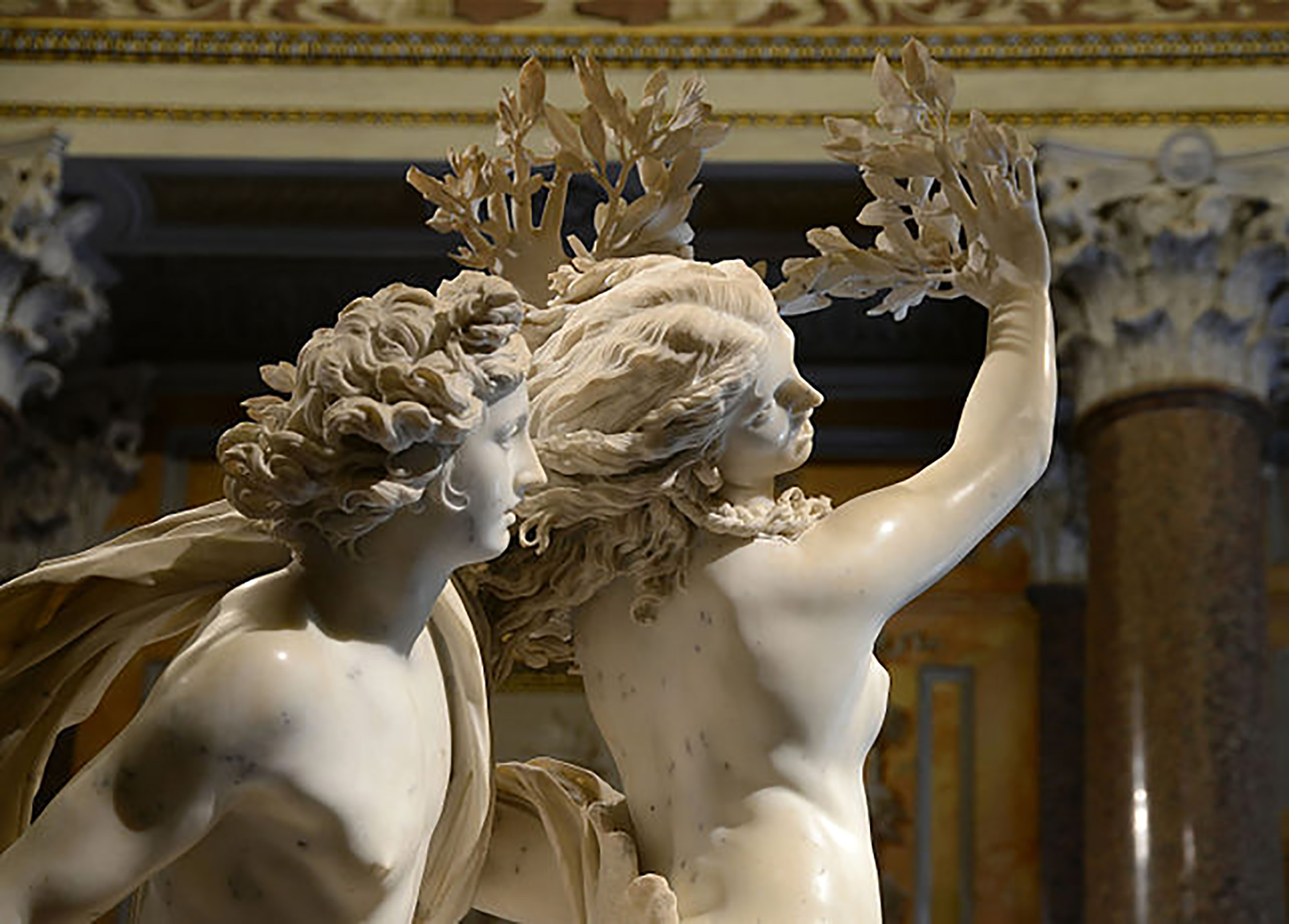 Sculpture masterpiece of Apollo and Daphne

The sculpture of Apollo and Daphne: a life-sized Baroque marble masterpiece, carried out in three years of work (1922 – 1925), which depicts the legend of the tormented love between the god Apollo and the nymph Daphne, who was transformed into a laurel tree by her father Peneus, god of the woods.

The History of this Sculpture

The sculpture was the last of a number of artworks commissioned by Cardinal Scipione Borghese, early on in Gian Lorenzo Bernini’s career.  Apollo and Daphne was commissioned after Borghese had given an earlier work of his patronage, Bernini’s Pluto and Persephone, to Cardinal Ludovico Ludovisi.

Much of the early work was done in 1622–1623, but a pause, quite possibly to work on the sculpture of David, interrupted its completion, and Bernini did not finish the work until 1625. Indeed, the sculpture itself was not moved to the Cardinal’s Villa Borghese until September 1625. Bernini did not execute the sculpture by himself; he had significant help from a member of his workshop, Giuliano Finelli, who undertook the sculpture of the details that show Daphne’s conversion from human to tree, such as the bark and branches, as well as her windswept hair. Some historians, however, discount the importance of Finelli’s contribution.

While the sculpture may be appreciated from multiple angles, Bernini planned for it to be viewed side on, allowing the observer to see the reactions of Apollo and Daphne simultaneously, thus understanding the narrative of the story in a single instant, without the need to move position. 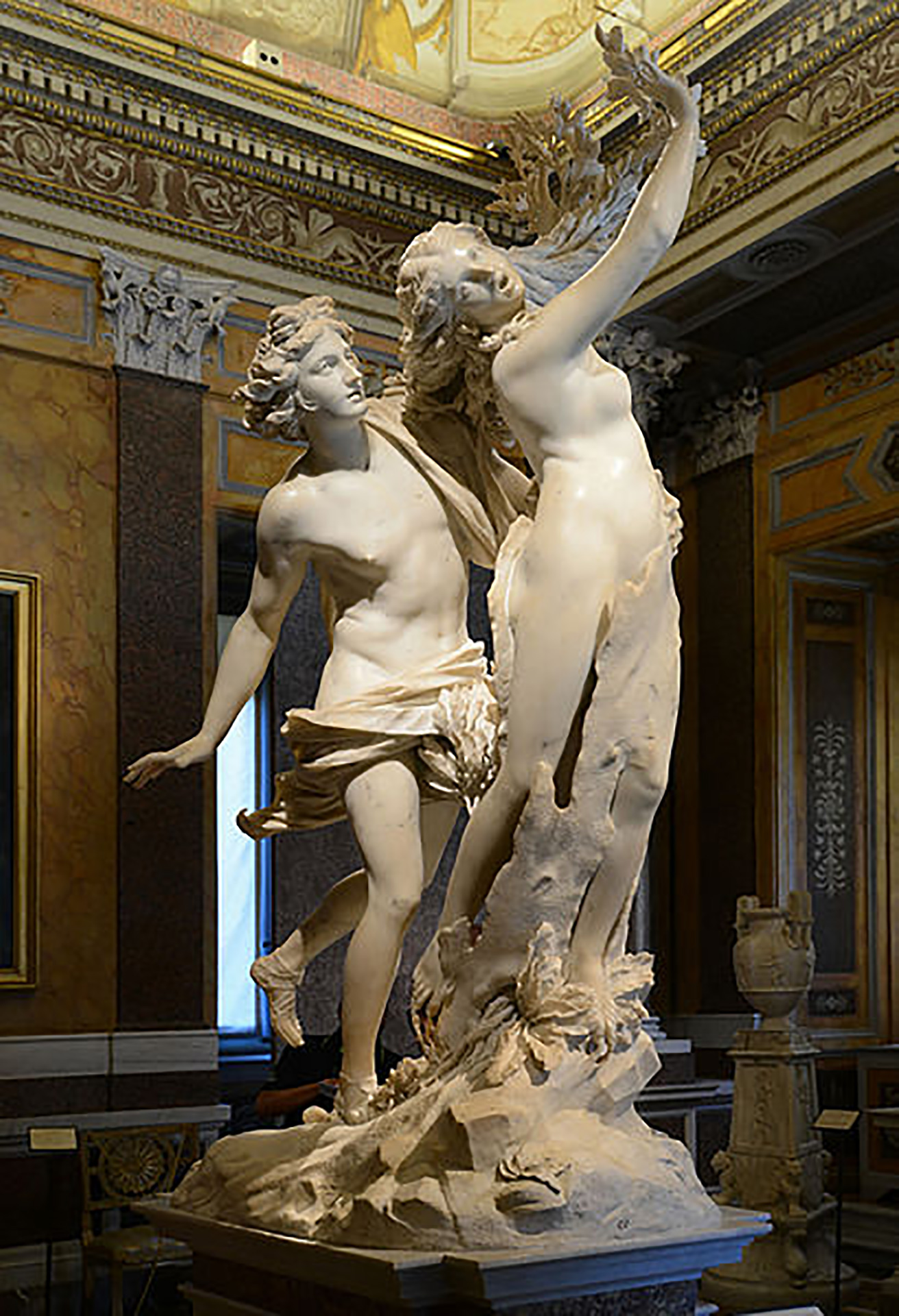 When Phoebus (Apollo), fated by Cupid’s love-exciting arrow, sees the maiden daughter of Peneus, a river god, he is filled with wonder at her beauty and consumed by desire. But Daphne has been fated by Cupid’s love-repelling arrow and denies the love of men. As the Nymph flees he relentlessly chases her—boasting, pleading, and promising everything. When her strength is finally spent she prays to her father Peneus:

Destroy the beauty that has injured me, or change the body that destroys my life.

Before her prayer was ended, torpor seized on all her body, and a thin bark closed around her gentle bosom, and her hair became as moving leaves; her arms were changed to waving branches, and her active feet as clinging roots were fastened to the ground—her face was hidden with encircling leaves.

Yet Phoebus lost none of his passion for Daphne:

Even like this Phoebus loved her and, placing his hand against the trunk, he felt her heart still quivering under the new bark. He clasped the branches as if they were parts of human arms, and kissed the wood. But even the wood shrank from his kisses, and the god said:

Since you cannot be my bride, you must be my tree! Laurel, with you my hair will be wreathed, with you my lyre, with you my quiver. You will go with the Roman generals when joyful voices acclaim their triumph, and the Capitol witnesses their long processions. You will stand outside Augustus’s doorposts, a faithful guardian, and keep watch over the crown of oak between them. And just as my head with its uncropped hair is always young, so you also will wear the beauty of undying leaves.

Paean had done: the laurel bowed her newly made branches, and seemed to shake her leafy crown, like a head giving consent.

The praise for Apollo and Daphne continued despite the decline of Bernini’s reputation after his death. A French traveler in 1839 commented that the group is “astonishing both for mechanism of art and elaborateness, is full of charm in the ensemble and the details.”

A more recent historian, Robert Torsten Petersson calls it “an extraordinary masterpiece … suffused with an energy that works out of the tips of the laurel leaves and Apollo’s hand and drapery.”

As a foundry we offer complete Restoration and Conservation performance in the care of private and public art work of cultural property, in accordance with the Code of Ethics and Standards of Practice of The American Institute for Conservation of Historic and Artistic Works, known as AIC.

Visit our website today and view all of our quality professional services. Visit Us

Previous Post A “King” Bronze Next Post The Permanence and Beauty of Cast Plaques, Buccacio Sculpture Makes It Possible